It may happen sooner than you think

I’ve always been close to my iPhone, so I thought we had a good relationship, one built on mutual trust. But last Saturday, when I checked my WordPress account on my iPhone, I learned that it has a secret life on Facebook. I took a screenshot as evidence. Here is an enlarged picture:

164,335 Facebook followers!  I was beside myself, which is rather convenient when you want to have a conversation with yourself.

I: How did it get that many followers?

Myself: It has that two-way camera, and you walk around the house at night with nothing on but your winter pajamas and your robe!

I: Do you think it’s taking pictures when I’m not looking?

Myself: Probably. And remember, it has a built-in recorder.

I: Do you think it’s revealing all my secrets to the world?

Myself: No, you’re already doing that on your blog.

When my daughter came over, I showed her what I had found, and we deliberately talked about it in front of the phone. I hoped to shame the phone into removing its Facebook account and stop using my WordPress account to garner followers.

But, friends, it has gotten worse. Look at the screenshot I took last night: 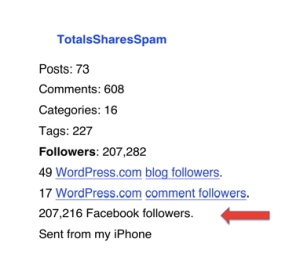 Already up to 207,216 followers. That’s over 42,000 new followers in just two days. This morning the number was up over 2,000. At this rate, by March of next year, every single person on Facebook will be following my iPhone. World domination will follow.

I need your help, kind readers. You see, I don’t have a Facebook account. That’s why I’m afraid.  I am not on Facebook as yearstricken or under the name my mother gave me. Don’t laugh. Not everyone in the world is on Facebook. There are at least two tribes in the Amazon that don’t have any members on Facebook yet.

Would you please go to your Facebook account and see if there are any photos of a somewhat mature woman in a burgundy down-filled robe? If there are photos with her robe open *blush*, you may see blue pajamas with these very cute moose on them. Kindly remove the photos. If my phone insists on having an account, I don’t want it luring people in and gathering followers with risqué photos of me. That’s not the proper path to world domination.

Thank you for your help.