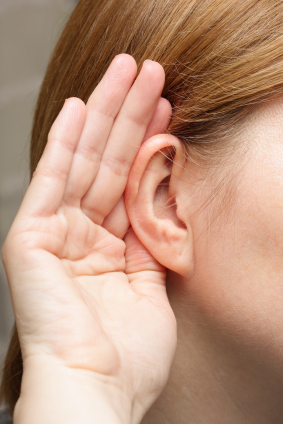 What? You know I can't hear you

In the last few years of my mother’s life, it became clear that she needed a hearing aid. No matter what you said to her, she responded with “what?”

“I think Congress is doing a great job.” “What?”

It didn’t matter if you told the truth or lied and said you thought Congress was more than a group of self-serving bootlickers, mother’s response was always the same. She knew she wasn’t hearing well, yet she resisted getting a hearing aid. The people around her had to repeat everything several times. The echo made people want to pull out their hair.

After months of reasoning and piles of hair all over the house (others, not hers), she agreed to see an audiologist and get fitted for a hearing aid. She wore the device for several days, and then began leaving it in the dresser drawer. The dresser began to hear everything that was said and eavesdropped on several conversations that were none of its business, and mother again started punctuating every statement and question with “what?”

I was visiting my brother and her when this happened. He was at work, so it fell to me to take mother back to the audiologist. Mother explained that the device didn’t fit properly, so the doctor fiddled and adjusted and asked several questions to make sure that it was comfortable. She was very patient with mother and didn’t rush her. Mother said yes to every question about how well it fit and we left.

On the way home, we carried on a normal conversation. And we had several days of echo-free talk. Then late one afternoon, I went into the kitchen to make dinner. Mother went to her room for a book, came back into the living room, and sat on the couch to read. The house had an open concept floor plan, so we could see one another. The first time I shut the cupboard door, she said, “What?”  I laughed and said, “I didn’t say anything.” She looked puzzled, so I repeated it. She sighed, put her book down, and said, “You know I can’t hear you.” I walked over, told her I hadn’t said a thing, and that I had just shut the cabinet door. I asked her where her hearing aid was. Of course I knew. I also knew that the dresser could now hear everything we said, so I listened patiently as she explained that the hearing aid felt uncomfortable.

I went back to the kitchen. A few minutes later, I shut another cabinet door and she hollered, “What?” Again, I had to walk over to her and explain that I was not speaking to her. I assured her that if I had anything to say, I would walk over  to tell her. She actually called out, “What?” one other time during that meal preparation. I have never cooked so quietly in my life.

At the meal, my brother and I asked her why she didn’t tell the audiologist that it still didn’t feel right.  She looked at us, incredulous that we would even ask such a question, and said, “I didn’t want to bother her.”

We laugh about it now. You don’t bother folks you hardly know. Bothering is for the ones you love, the ones who love you back. And now I miss all the bother that mother was.