The party started at Shakey’s. All of the other girls had already passed over the border from twelve to thirteen; we were celebrating my crossing. The twelfth year had been all uphill; my childhood treasures abandoned one by one as I slogged upward. The changes in my body made the climb harder, but I believed that if I reached the marker “Thirteen,” I would arrive in a place closer to freedom, a place closer to where dreams lived.

After the birthday pizza party, the girls came to my house for a slumber party. We lived in military housing on Fort Baker, a small Army base sitting across from San Francisco in Marin County. Our nearest neighbor, the Golden Gate Bridge, bore the scrawl of our names on its pillars. My stepfather, an Army Captain, defended us from the communists by working in the Nike missile program. We lived in one of the large duplexes up on the hill above the parade grounds.

Mother met Ralph within months of my daddy’s death. My father may have been the love of her life, but he was gone, and she needed a man. Her need, so much more than a want, compelled her to go in search of someone to marry her and take care of her. She searched in all the wrong places, but she found her man. 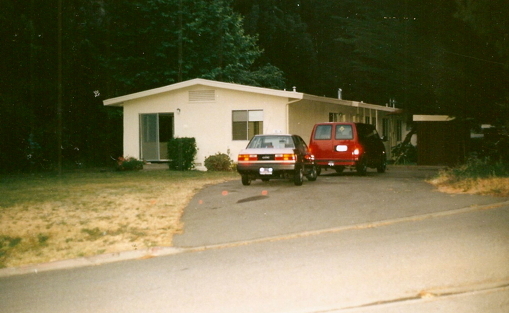 Our house on Fort Baker (photo taken over 20 years later)

Mother met Ralph at a bar; he was seven years younger and a first lieutenant in the Army. She was out dancing and drinking, doing her best to stop being a widow. She succeeded; less than six months after they met, they married. At that time we lived in El Paso, and Ralph was stationed at Fort Bliss.

After they got married, the dancing stopped, but not the drinking. Mother had married an alcoholic before, so you would think that she could recognize the signs. She didn’t, or maybe she didn’t care. She had someone to share her bed and her expenses; she wasn’t alone anymore.

The night of my thirteenth birthday party, Ralph went to Happy Hour. He always stayed longer than an hour, and it never made him happy. He came home late, while my friends and I were in my bedroom, laughing, whispering about boys, and eating snacks.

Ralph never liked my sister and me, and the older we got, the less he liked us. Particularly me. He talked ugly when he was drunk, so I was used to being called a bitch and a little whore, but I never thought he’d call my friends that. He did. Then he told them to get out of his house. Now.

I can’t remember much of the chaos that followed. I think my mom took the girls home. One or two lived in Sausalito; two of them lived in Marin City. I do remember that Ralph passed out in the bedroom he shared with my mother.

Sometime after midnight, my mom packed suitcases for all of us. Then we got in the car to drive to Texas to my oldest sister’s home. Mother took all the cash in the house, including a piggy bank made from an empty soap container that belonged to my three-year-old brother. Afraid that Ralph might hear the car engine, she put it in gear and let it roll down the driveway before starting it.

My sister welcomed the four of us into her small three-bedroom house, already full with the five of them.  Ralph sobered up and pled with mother over the phone until she agreed to go back. It will never happen again, he promised. Whatever he felt for mother or for us never looked like love to me, but maybe it was. Or maybe he needed a wife and a family to get promoted. He had his reasons, and she believed him or pretended to. I told her I wouldn’t go. My oldest sister invited me to stay; she understood why I couldn’t go back. She had lived the same story; in fact, all of mother’s children did or would. My daddy had been her stepfather, and he had never liked her; so she ran away at 17, got married, and had her first baby when I was two years old.

I spent a year away from home and loved living with my sister, her husband, and three children. I never noticed the cracks in the foundation of her home, but that year the walls still stood and they sheltered me. Within a couple of years, the walls crumbled; my sister fled, abandoning her children.

During that year, I had time to heal some of the wounds and forget some of the ugliness. In the middle of my freshman year at Irvin High School in El Paso, Ralph got orders for Alaska. My mom wanted me to come with them, and I agreed.

They came from California to Texas to get me, and in January of 1965, we drove up the ALCAN Highway to Fort Wainwright in Fairbanks, Alaska. It looked like a new beginning, a new chapter in our lives, but it wasn’t. That first chapter wasn’t over yet.

It’s a simple story, with more pain than some, but less than others. Standing on the peak of thirteen, my childhood looked to be a million miles away, the pathway back, long forgotten. On that first summit of my teenaged years, I thought I would be able to see the world, or least find a clearly marked path that would lead me to my dreams. I didn’t know what they were yet, but was sure I would recognize them once I saw them. No one told me it would be so hard. I had two choices: keep climbing or go through the dark valley. I chose the dark valley.

45 thoughts on “Crossing the frontier of childhood”