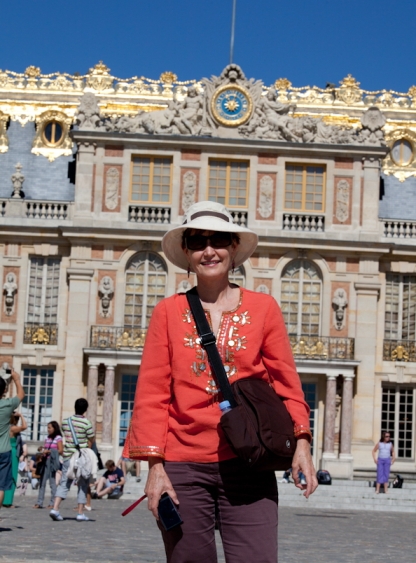 Even if the world isn't, my nose is straight.

I am a small woman, no taller than 5’3″, of slight build but wide in the hips. At the end of my torso, as you would expect, I have two legs, each one divided by an odd, lumpy knee.

My hair always liked being brown, until recently. My forehead needs a lot of space to think and furrow, so it told my hair quite emphatically, “Thus far, and no more.” Because so much skin is showing and I am modest, I wear bangs. Along the edges of my ears and forehead, the hair is experimenting with gray.

My eyes wear green, flecked with gold and brown. They don’t like make up because when they cry, they don’t like to make a mess on my cheeks. I admire anyone who considers those around them and tries to keep things tidy. No one has shown me as much of the world as they have, so I try to be kind to them and wipe their tears when they are having a bad day.

My jaw looks determined because it is. It has a lot to say if people would just listen. They don’t, so it is determined to keep shut unless someone really wants to know. We’ve enjoyed a lot of chocolate together.

My two front teeth are close, even though one is almost a year older. Some of the others arrived later and never learned to stand straight in a line. I’ve never held it against them. I’m attached to all of them and had a hard time two years ago when one them cracked under pressure. We couldn’t save it.

But my best feature is my small, straight nose. It is the leader of my face, breaking through the air like the prow of a small ship, the first to feel the cold, the first to bear the heat of the sun, and willing to help hold my sunglasses, all day if need be. My nose always gets there first, but it’s never proud. Day after day it brings me gifts; just yesterday it was the aroma of roses. And when I least expect it, it surprises me with brightly wrapped memories of my days as a child when I came home to the smell of freshly baked bread or broke through the surface of the water to see my mother beside the pool, lathering on lotion under the hot, summer sun.

I like all the parts of me, but if I had to choose my favorite, you can understand why I would say, “I pick my nose.”