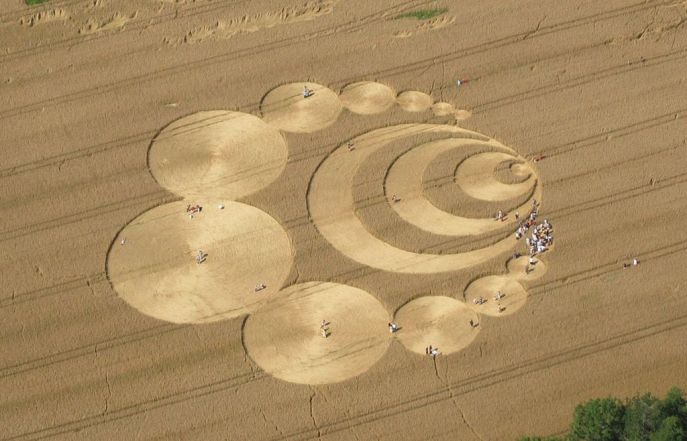 After much cogitating and looking up the definition of cogitate in various dictionaries, from which I learned its connection with “agitate,” and the idea of something revolving around in your head, much like the mind on the spin cycle, I finally decided to put an end to this first sentence. It was getting out of hand. If you’ve been reading along, you should be right about here by now. And since we have gotten past the awkward first-sentence introductory thing, we can move on. After all, you’re not here to diddle and dawdle. You’re here for answers, and unfortunately that’s what you’re going to get.

Since this is a blog post and not a dissertation, I can only scratch the surface of the topic. And although I know you are itching to hear my theory; first, I must address the rash of ideas out there about what causes crop circles.

I have to talk about other people’s ideas, which frankly don’t interest me much, but it’s necessary to try to appear fair and open-minded. One theory attributes them to hoaxsters (AKA pranksters), probably just youngsters who are hipsters and jokesters. Another blames Jerry Lee Lewis and his “Great Balls of Fire.” People with video-editing skills have captured pictures of these flaming balls of light on video (AKA moving pictures).

As to be expected when there are unexplained phenomena around, sandwiched somewhere into the plethora of theories, you’ll find a BLT (Burks, Levengood, and Talbott). These three biophysicists have checked out crop circles and discovered they could use a lot of biophysical words like node, expulsion, macroscopic, anomalous alterations, and magnetite to describe crop circles, but not explain how they got there.

Additional ideas have to do with the earth’s magnetic personality (AKA fields), the diatonic scale of music, and, of course, UFOs. Like I said, the theories are like a rash.

If you’ve read this far without having any idea where this is going, I both congratulate you and sympathize with you. I really don’t know how I got here either.

It had something to do with realizing the similarities between crop circles and cowlicks. Close-ups of crop circles whirl and swirl in the same pattern as the cowlick on the back of my head, which made me think of cows in space, soaring through the Milky Way. I’m pretty sure there’s a post in there somewhere, and I promise to publish it as soon as I can write myself out of this one.