It happened again. In a blatant act of partisanship, my right hand conspired against my left, made a wild grab for power, momentarily grasped it, and blocked my left hand from taking any action.

I was almost ten the first time. John F. Kennedy, winner of the Democratic nomination for president, chose LBJ (Lyndon Baines Johnson) as his running mate. Kennedy would have preferred someone else, but Johnson, a homegrown Texan, guaranteed the southern voters that Kennedy needed. The two men came to El Paso in September 1960 to campaign. I stood among the crowd lining the streets. (I have no idea who I was with, and my fact checker (AKA older sister ) doesn’t remember it at all.)

As Johnson’s motorcade drove by, he stuck out his hand. I rushed forward, thrust my right hand through the crowd and grabbed hold for two seconds. I don’t know what thrilled me more, that I had touched a famous person, or that I had discovered that fame resided in a hand just like my own, five-fingered with an opposable thumb. Like all famous hands, it  had a much wider span than mine, but it was attached to a man who could have been my neighbor or my teacher.

The second time happened last Friday, September 28. Earlier in the week I gave up all of my personal information for a free ticket to attend a speech by Michelle Obama at nearby Lawrence University in Appleton, Wisconsin. I arrived later than I had planned because I had morning classes. About 400 other people were late as well. Most of them stood in front of me, waiting to get through security and into the auditorium. About one hundred stood behind me. By the time I got out of the security area, a young volunteer directed me away from the auditorium toward a small tent next to the building, saying, “The fire marshal won’t allow any more people into the building. You can hear the speech from inside the tent.”

Was I unhappy? Yes. If I had wanted long lines, endless waits, and annoying security, only to be turned away at the gate, I would have booked a flight.  No one seemed happy, but we remained civil (this is the Midwest) and followed directions, mooing and lowing as we crowded into the fenced area beneath the tent. I amused myself by exchanging complaints with the others and by watching the well-dressed Secret Service men walk back and forth talking to their wrists. Forty-five minutes past the scheduled time for the speech, a group of grim wrist talkers guided Mrs. Obama around the perimeter of the holding pen. When she got close to me, I whipped out my phone, took some quick videos, shoved the phone into my left hand to distract it, and grabbed her outstretched hand with my right. Her hand felt just like mine, only more famous, and attached to a woman much taller in person than on TV. 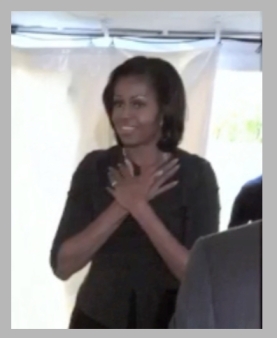 Still picture from my iPhone video.

After the gripping event, I left, as did almost everyone in the tent. Watching the speech online appealed to me more than standing in a covered corral listening.

Later that day my husband asked if I planned to wash my hand. “Better yet,” I said, “I plan to sell it on eBay.”

IMPORTANT WORDS FROM YOUR SPONSORS:

I am yearstricken’s right hand, and I approve this message.

I am yearstricken’s left hand, and I don’t.