When I was young I had a wart on my palm. Mother cut a potato in half, rubbed the wart, put the two halves of the potato back together with toothpicks, and threw it away. If you never see the potato again, she said, your wart will disappear.

I don’t think I’ll ever forget the look in that potato’s eyes as my mother stabbed it with those picks and then casually dropped it in the trash. I imagine it carried its grudge all the way to the city dump. Buried under garbage, it sprouted revenge. After writing its story in pollen, the potato wrapped it in some small white flowers, pushed the little envelops up through the trash, and waited for a passing bumblebee to stop and carry its tale of woe into the world. In this way, I believe it could spread its hard feeling.

My wart disappeared, but for decades now I have looked into the eyes of potatoes wondering if they recognize me, fearing they are related to that spurned spud. I suspect it was Thanksgiving 2010 when it happened. I pulled out a bag of potatoes and placed it on the counter. Then I busied myself at the sink, clearing out a spot so I could peel the potatoes. No one else was in the kitchen, but I had that odd feeling that someone was staring at me. I whirled around: nothing but that bag of potatoes. So I whirled the other way and picked up a small paring knife. Then I whirled back to face the bag. Protruding from the mesh was a small sprout like a pale white finger, pointing at me, accusing me. Dizzy from my whirling, I reached over and broke off the finger. That was my mistake. Now I couldn’t tell which potato was angry with me. 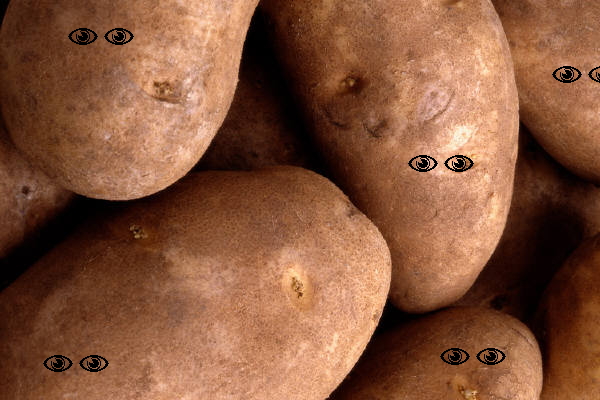 I couldn’t throw all of them out, so I took them out of the bag. Lined up next to the sink in their starched brown jackets, they all looked the same. As I washed them, I tried to appear calm and avert my eyes. Each one stared at me with a blank look that unsettled me because it reminded me of my husband, sitting in the living room on the couch, watching football. Was he part potato? He was getting lumpier with age. My mind reeled as my thoughts whirled; then I reminded myself that I had lived with him wart-free for thirty years; he couldn’t be related to that potato of long ago. That calmed me down. After I peeled the potatoes, I boiled them in hopes of softening them toward me. But I was so worked up by then that I mashed them in a frenzy before the meal.

Soon after that, I got a wart on my palm again. I don’t remember where on my palm the wart was when I was a young girl, but my imagination has been insisting all morning that this wart is in the very same place.

I’ve tried salicylic acid and vinegar-soaked cotton, and considered duct tape. Even though I fear revenge, using a potato appeals to me. My online research has revealed that many people use potatoes for wart removal, so maybe my story about how that childhood potato passed on its grudge is all nonsense. More likely all potatoes carry a grudge. That’s what comes from being so thin-skinned.