A tour bus has 4½ seats suitable for touring, and one of those belongs to the driver. That leaves 3½ seats for the tourists to scramble for. All of them are in the front row. From there you get an unobstructed view of the world coming toward you with its hands full of treasures. The half seat is the one in the front row directly behind the driver. You can still see quite a bit, just not directly ahead because directly ahead you see a head. All the seats that follow provide you with half a tour. If you do right-sided touring, you see the world right, but you can’t see what’s left. Conversely, if all you see is left, you don’t see things right.

Tuesday morning we ate an early breakfast in our Killarney hotel, filling up on butter-slathered scones, and  then hurried over to the tour bus stop to make sure we got the front seats. Our route: the Ring of Kerry, a 105-mile drive around the Iveragh Peninsula. Our direction: clockwise, the direction all tour buses take because buses can’t pass one another on the one-and-a-half-bus-wide roads.

Ireland has more bogs than just about any other country in Europe. Bogs are burial grounds for vegetation. Green things die, rain falls, oxygen chokes, drains plug, decay happens, decomposition doesn’t, and peat forms. Re-peat each century and you have yourself a bog. If you want to preserve a body, bury it in a bog. Of course, it helps if you bury it a few centuries ago. (Read about the amazing preservation properties of bogs and a recent find in an Irish bog at National Geographic online.)

Did turf-cutters get bogged down sometimes by having to repeat the same job all the time?

Close up of peat “bog logs”

But back to the Bog Village Museum in Glenbeigh. It consists of a small village founded by a turf-cutter (peat gatherer), Jeremiah Mulvihill. The six furnished buildings depict life in the early 1800s.

On route to our next stop, the driver gave us the option to stop at a sheep-herding exhibition. “The best five euros you’ll spend in Ireland,” he said. I raised my hand ”yes,” confident that all the others behind me would do the same. After all, each of us paid hundreds if not thousands of euros to travel to Ireland, and this was only five euros. A few pushy ones barked out “no,” and the rest, sheep-like, agreed, so we didn’t stop. I still snarl every time I think about it.

The Atlantic Ocean crashes onto the beaches all along the western coast we traveled, and the MacGillycuddy Reeks (“black stacks” mountains) stand in the middle of the peninsula to watch. Carrantuohill mountain sees the most because it’s the tallest (about 3400 feet) in all of Ireland. I struggled to keep the views from taking away my breath, but lost.

Coastline on the Iveragh Peninsula

We returned to Killarney via Moll’s Gap named for Moll Kissame (a great last name for an Italian: What’s your name? Kiss-a-me), who ran a pub and quenched the thirst of travellers in the early 1800s. She also put the shine in the moon, if you get my drift, with her homemade, unauthorized whiskey. She definitely left a gap when she died. A tourist shop now stands in place of her pub.

Mind the Gap; Moll did. 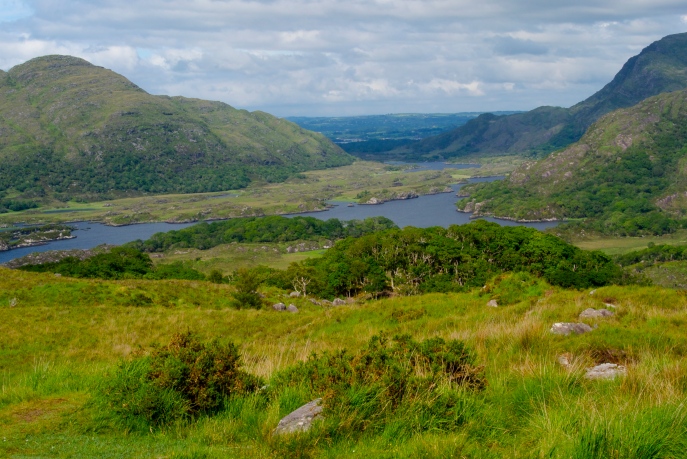 We stopped once more before returning to Killarney at Ladies View, a scenic spot providing a panoramic view of the Killarney Lakes. Apparently it remained nameless until 1861 when Queen Victoria, then sovereign of all of Ireland, visited the lakes with her ladies-in-waiting.

We didn’t find any four-leaved clover on the tour, but we found shamrocks in some Irish coffee. I drifted off that night under moonshine, wondering if Moll served that kind of coffee to her customers.

Next installment: The end is near!

33 thoughts on “Bogged down in Ireland? For peat’s sake, why?”