Imagine the weather as a blog. Day after day the weather posts something new, rearranging the clouds, sending winds first this way, then that; then one day it needs a break, and reblogs an earlier post. That’s what Dublin’s weather did the Sunday we were there. Instead of posting a summery June day, it reposted a day from March, an especially cold and rainy day that barely made it to double digits on the Celsius scale.

It turned out to be the perfect weather for me.

The night before our one day in Dublin, I had looked over the brochure for the Hop-on Hop-off bus and selected bus stop number 3 as my must hop-off must-see place to go. I was going to see the Book of Kells at Trinity College. No matter what.

Life, of course, has a way of showing us what’s what. And sometimes “what” matters. Our “what” turned out to be Formula One: Bavaria City Racing. To accommodate and showcase F1 cars and other means of transportation that go zoom, the police cordoned off half the streets of Dublin for the small crowd of 100,000 people expected to attend.

We waited until almost lunch to leave the hotel, and I dressed as warmly as possible with my I’m-pretty-sure-I-won’t-need-anything-too-heavy-because-it’s-summer-and-I-mean-how-cold-could-it-possibly-get clothing that I had carefully packed several hours before I left on vacation. Four layers later, I stepped outside and began the long, slow process of freezing to death.

We took the tram downtown and waited in the cold for the bus. For a while I stood inside a telephone booth, but then we discovered we were waiting in the wrong place. Once we found the bus stop (the one without a phone booth), we made sure we were first in line. That way we could choose the best seats. Because brilliance runs in my family, both my brother and I thought it would be a good idea to sit on the top of the tour bus under the little roof. The one that doesn’t cover the entire top half. The one that lets cold wind blow down your neck and find your skin beneath the four layers of summer material. Surely, it would be heated. And we could see so much better. In a better world, a warmer world, a not-so-rainy world, it would have been a good idea. We thought we would have to scramble to get the front seats at the top, but oddly no one else went up top.

But no matter, in just two stops from this first one, we would hop off and see the Book of Kells. Except we didn’t because we couldn’t. The bus had to go a different route and visit places out of order because the race cars needed the streets. So we sat in the cold, waiting to hear the driver announce stop number three, which was difficult to hear over the chattering of our teeth. 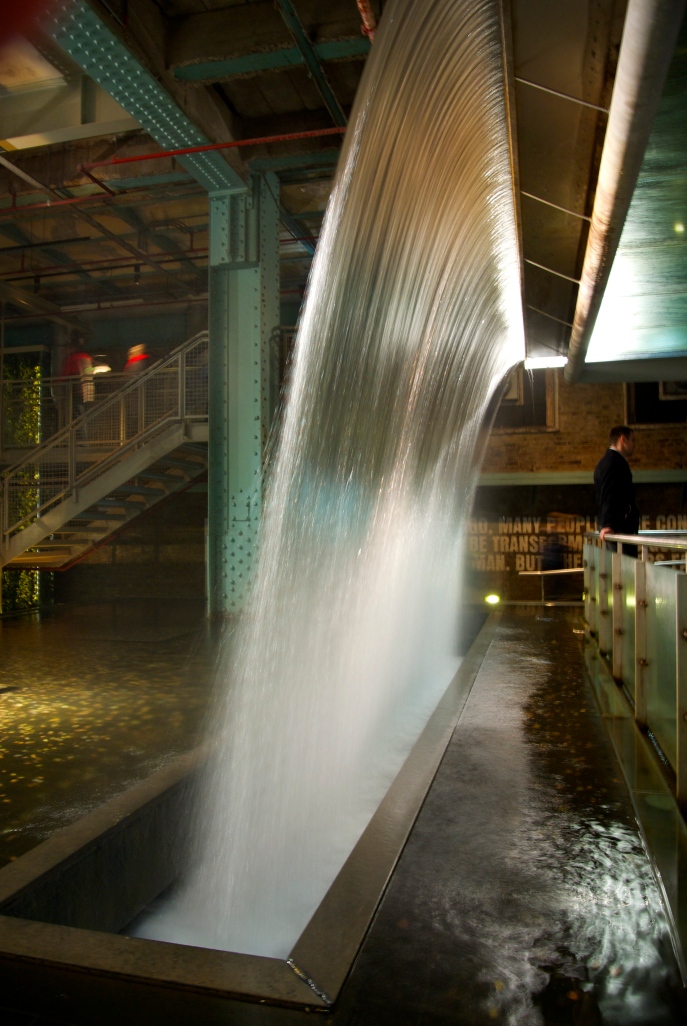 We spent a couple of hours exploring the seven-story building, learning the history of Guinness, and walking through a mock-up of the brewing process and cooperage (beer barrel building). We took the glass elevator up to the top floor, the Gravity Bar,with its circular wall of windows that provide a panoramic view of Dublin, weather permitting. The weather did some intermittent permitting, but no one seemed to mind. Everyone there was enjoying a pint of Guinness, which is included in the price of admission. 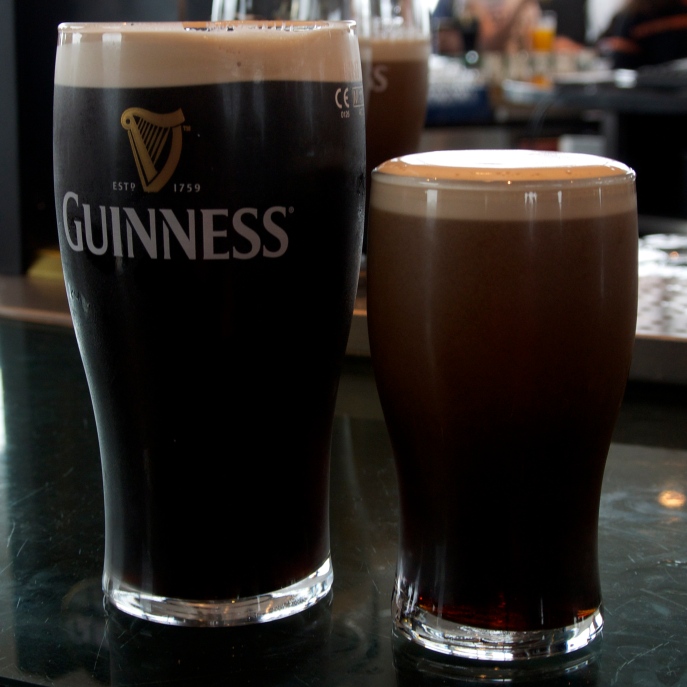 At the Gravity Bar

Hey, bartender, there’s a girl in my Guinness!

When my brother and I de-bused at the Guinness Storehouse, we discovered that the lower level of the bus had a surfeit of heat. While we had suffered up top, all the other tourists basked in the warm and cozy seats below us. To understand why we didn’t just move to the lower level right away would require more explanation than I can give you in just one blog post. Let me just say that one of the defining characteristics of my family is a determination and hardiness that looks vaguely like stupidity in a tuxedo.

From that point, we rode in the lower part of the bus, waiting for number 3 to be announced. It never was because that part of the route belonged to Formula One for the day: it’s route ran right in front of bus stop number three. By the time we realized this, we were headed back to O’Connell Street where we started. We were too tired and hungry to go through the tour again, so we walked over to the Spire of Dublin, officially called the Monument of Light. Our bus driver pointed it out on the tour and called it The Stiletto in the Ghetto. Dubliners have a few other colorful nicknames, which you can search for on the web. The Spire stands almost 400 feet, and everyone on the web says it’s the tallest sculpture in the world, so I believe it. You should, too. (It cost somewhere between four to five million euros, approximately €40,000 per shiny, pointy foot.)

Normally, after any kind of disappointment such as not seeing the Book of Kells, I pull out my small dark cloud and place it over the center of my head, halo-like. But that day in Dublin, I decided not to do that. Why waste my time walking under a small dark cloud when I could walk under the big dark cloud over Dublin. It seemed friendly somehow, as if the entire city shared my disappointment, and I felt strangely cheered. Then again, maybe I felt strangely cheered by the Guinness.

Next installment: On the rails

33 thoughts on “Vacation: Racing to disappointment”