I like chocolate dark, three taste buds shy of bitter. One small bite and I start getting messages from my brain saying, “Thank you,” and “More, please.” As food, it delights my tongue, and as medicine, it soothes my brain.

I have liked chocolate since I was a small child and discovered that the Easter bunny laid small chocolate eggs in my Easter basket. I later learned that rabbits do not lay eggs; they do, however, extrude something that is eerily similar to little chocolate pellets. I lived with that disturbing juxtaposition of ideas for years, but eventually got over it and continued trying to consume my allotted 11.64 pounds of chocolate each year. That’s how much each American averages. The Swiss eat almost twice that. Clearly, I was born in the wrong country. 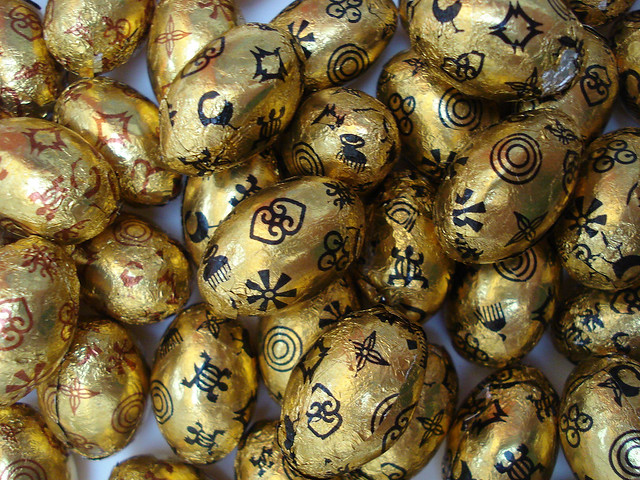 As an adult I have lived a relatively undisturbed life as far as chocolate goes. However, these last few years, an uncomfortable truth has been knocking on the door of my brain. It has pamphlets, which is always a bad sign. Opening the door means I must listen to a prepared speech, sign a petition, and probably donate some money. Maybe even the money I would use to buy chocolate.

For me, the best chocolate has at least 70% cocoa. That’s the ingredient that has so many health benefits, including helping to protect my heart. Cocoa makes my brain happy; and like so many gifts, it grows on trees.

The cocoa plant is delicate, especially when it is young. It requires attention, care, and nurture to develop properly. If a plant is tended carefully, it can start bearing fruit when it is four or five years old and produce for several decades.

Cocoa plants sound a lot like children, don’t they? Children need care and nurture to grow properly, too. And that’s the problem. Many cocoa farms employ children, and some farmers enslave children, making them work 12 hours a day without pay or much to eat.  At night, the children are locked up. If they try to run away, they are beaten.

I don’t want to eat chocolate that has someone’s childhood as its main ingredient. No amount of sweetener can make that kind of bitterness palatable. And if I know that the price on my candy bar is low because some children are forced to pay the real price by spending their childhood enslaved on farms, no amount of inexpensive chocolate is going to make me happy. My tongue doesn’t mind at all; it likes chocolate no matter what, unlike my brain, which has nothing better to do than gossip with my heart.  Once my heart gets involved, the two of them always insist that I do something.

Refusing to buy chocolate might make me feel good, but that’s about all it will do. It won’t help the thousands of smallholder farmers in West Africa, Indonesia, Brazil, and Ecuador who grow cocoa. They deserve a living wage; however, they receive only a pittance of what I pay for chocolate. Some of these farmers resort to forced labor to make growing cocoa worth their while. If I’m going to enjoy eating chocolate, I can’t ignore these facts.

Ignorance is bliss until it isn’t. Now I have to pay attention, read labels, and check up on the companies I buy from. I have to sign petitions. And I have to pay more money for chocolate that doesn’t have “essence of childhood” as an ingredient. But I don’t mind because then I can start listening again when my brain says, “More, please.” And it will make my heart happy again in more ways than one.