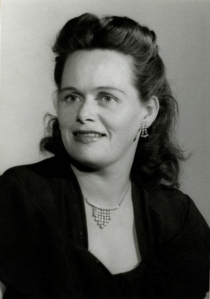 Most of her life, she worked as a waitress and brought home the good smell of the kitchen with her. With her limited education, waiting tables was one of  the few jobs she could get. After she married my father, he started his own business as an electrical contractor and used the G.I. Bill to attend college at night. Mother’s paychecks weren’t much help, but her tips were. She made good money that way.

For a while she worked at a Mexican restaurant, and her uniform was a white blouse and a black taffeta skirt. When she would come home from work, the aroma of corn tortillas clung to her clothes. I remember hugging her around her legs when she was wearing that taffeta skirt. Those two hungers –food and love – intermingle in those memories, and I can’t eat enchiladas or tacos now without thinking of her.

Mother’s perfumes, though, are more important than the food smells, as far as my odor-evoked memories are concerned. One of her

favorite scents was White Shoulders. It has always been one of my favorites, too, although it doesn’t smell the same on me as it did on her. The notes of the perfume play out differently based on each person’s body chemistry, but the melody is recognizable.

Mother’s signature scent was a perfume by Worth. It was called Je Reviens, but she always called it Worth. It launched in 1932 and was immensely popular during the 1940s.

She said that when she wore it, men would stop her on the street to ask her what perfume she was wearing. I’ve heard other women say they experienced the same thing, but I’ve always wondered about that.

In my mother’s case, one or two men may have stopped her just because of the perfume. Most, I think, just wanted to talk to the beautiful, curvaceous woman they saw walking down the street, and that fine smell gave them an excuse.

The original perfume became increasingly difficult to find over the years and was resurrected as Je Reviens Couture in 2004, the year my mother died. It has been reformulated, so it’s not the same. The original Je Reviens, like all perfumes made prior to World War II, used only natural ingredients.

Before mother died, she lived with my brother, so I spent time with him after her death. One evening he called me into his room. In his walk-in closet, he had a drawer of keepsakes, one of which was an empty bottle of Worth oil that mother had kept. He carefully opened it, we each took a whiff of the lingering scent, and then he closed it up again. I still remember that night of laughter and tears and the two of us, standing in a closet, taking hits off a perfume bottle, trying to resurrect mother from a bottle labeled Je Reviens, the French for “I will return.”