If a froggery is gathering of frogs, a bloggery must be a gathering of blogs. Or, for my purposes, a gathering of bloggers, who sit around the WordPress pond croaking. Not the kind of croaking that leads to funerals, although some days, because of the posting, the reading, the commenting, the researching, and  the revising, followed by more of the same, the exhausted blogger may feel close to death.

Headline: Death by Blog. Today in Podunk, Wisconsin, a husband discovered his wife’s dead body in their home office, sitting at her desk and staring at her computer with her fingers still on the keyboard. Mrs. Mortimer had been there for three days before her husband realized she was dead. “We often went days without speaking,” he said, “because she spent all day writing, reading, and commenting on blogs.” It’s the fourth case of death by blog this week. Experts attribute the deaths to blogged arteries, leading to permanent brain freeze.

Okay, back to frogs and blogs. After extensive research, which may translate to over a hundred minutes, I have discovered some amazing similarities between frogs and bloggers, which I think you will find ribbiting. I know I did.

But first, you must understand that the crucial difference between frogs and toads is all in your head. Popular culture put the idea there, along with thousands and thousands of images of J*st*n B**b*r, he who must be asterisked. In spite of their differences, frogs and toads belong to the same order, Anura; they just have different last names. Some have more warts than others, but so do some of your family members.

At last we are on the same taxonomic page, so here are the similarities: 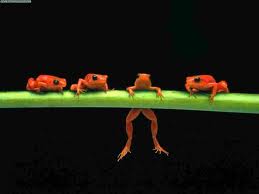 Happy Leap Day! I know it’s tomorrow, but I have been pondering this for a while and wanted to get a jump on all the celebrations and well-wishing. And, although I have toad you this before, thanks for reading.

All photos courtesy of http://www.theinformationarchives.com/frogs/