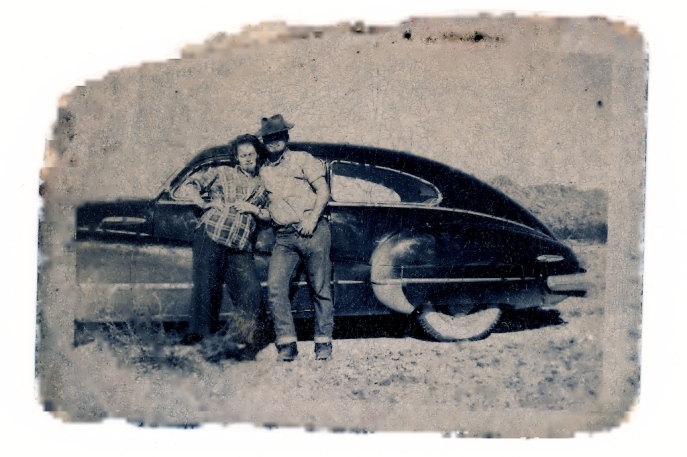 My mother and father met in Arizona in a little town out in the middle of the desert. Mother had the bad habit of marrying abusive men and had just fled her second marriage to come live with her mother. She arrived in desperate need of a dentist, having had several teeth removed, without any anesthesia, by her second husband’s fist. She left two children behind with their paternal grandmother and brought the two oldest with her, a boy and a girl from her first marriage. They traveled three days by bus from Alabama, with no money for food. Other passengers took pity on the children, who didn’t even have shoes, and shared some of their food. Her own mother didn’t recognize her when she got off the bus.

Once her teeth were fixed, mother started working as a waitress in a restaurant owned by her Aunt Vern. Mother’s mother, my grandmother, worked there as a cook. At first, mother and the two children stayed with Aunt Vern — a hard woman known to cheat her employees, even those who were relatives. After a few months, they were able to move into their own place. Neighbors and customers donated beds, a table, chairs, and a stove.

Early one evening, on the other side of sober, my father walked in. Originally from Texas, he was in Arizona for a job. As soon as he saw mother, he asked her out on a date. She told him to go home, sober up, and come back at 9 p.m. when she got off work. She never expected him to show up, but he did, and he had sobered up a bit. As they were leaving the restaurant, he said , “I want you to know that I’m not the marrying kind. I just want company, somebody to share a beer with and to dance with.”  She responded, “That’s fine with me.”

I guess the beer and the dance weren’t enough for either one. They married not long after they met.

The desert doesn’t seem like a very romantic place to find someone. Not many go in for moonlit walks among the cactus and rattlesnakes. But that’s where they found love. Later they moved back to the vast desert area of  west Texas, and one of their favorite things to do was to drive out into the desert with their geiger counter and go prospecting for uranium. In the early 1950s there was a uranium craze in the southwestern and western states fueled by the nuclear weapons program developed by the U.S. government. Prospectors armed with geiger counters searched the desert looking to strike it rich.

My parents never found any radioactivity, but I like to think they found what they were really looking for. There’s more than one  way to strike it rich.