The house we do most of our living in sits across from the smartest block in our city. The north side of the smarty-pants block hosts an elementary school, the northwest corner lends its land to a charter school, and the south side carries a middle school on its back. Mornings and afternoons cars line up outside the schools, disgorge or engorge students, and slowly drive off into whatever comes next. Some children, however, still walk to school. 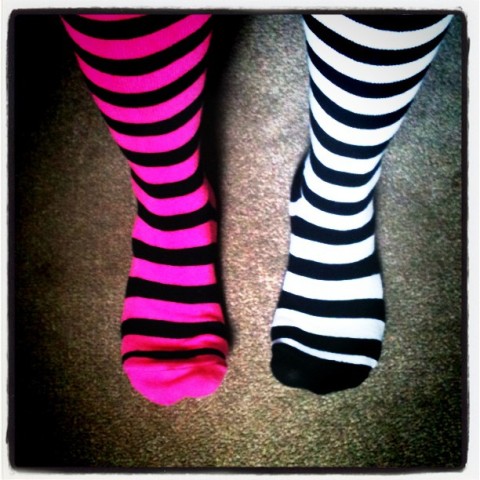 The other day as I was driving past the middle school, I saw a girl wearing one white sock and one black sock. Suddenly those socks were to me, what that madeleine was to Proust. The only difference between our experiences is that I didn’t have to eat the socks to invoke my involuntary memory and Proust did. He ate, of course, a madeleine, not a pair of socks, which if he or I had done would have merely invoked an involuntary gag reflex. Oddly, that is my exact response when I remember junior high and its humiliations.

My memories of that time center on the betrayal of my body. As a young child my body took care of me, balancing me on bicycles and roller skates, walking me to school and back, and carrying me through those early years without asking much in return. A band-aid for a skinned knee, a dreamsicle on a hot summer’s day, and whatever clothes I could find, mismatched or not, satisfied it.

Then the change came. In health class I watched the educational films about the wonderful changes waiting for me when I arrived on puberty’s shore. I would turn in my child’s body for that of a beautiful young woman, except I didn’t. I had the same body, only pimply, hairy, and lumpy in all the wrong places. Worst of all, I could not go back to my pirate days or run wild through the neighborhood seeking adventure.

Now I had an awkward body to shower, with legs and underarms that needed shaving, and parts that needed straps and hooks to harness in (the special underwear of the initiated). Everyday I had to present this new body to the world to be judged by its impossible standards of beauty. My body elicited comments, mostly from boys but also from girls, about its lack of conformity to the beautiful women who lived in our TVs, danced across our movie screens, and permanently resided in our minds. I had never been a stranger to self-consciousness or public embarrassment as a child, but most of the time I was free from of it. When the changes came, I picked up that terrible burden and carried it with me everywhere I went. 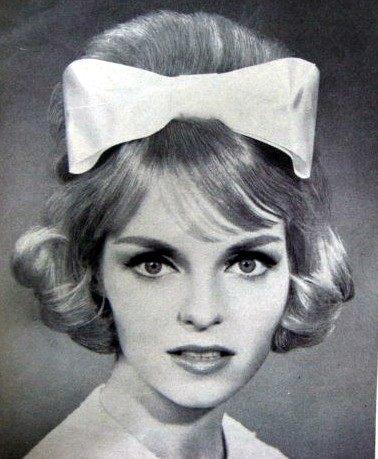 Sadly I never had such a large bow nest in my hair.

My hairstyle of choice during junior high was a bird’s nest. My top hair, cut short, was first permed, and then rolled into obedience each night. On good hair days, with teasing and hairspray, the bangs poofed down and the top poofed up creating an ideal place for a large velvet bow to perch. The rest of my hair was left long. By lathering it in Dippity-Do and sleeping on rollers, I could flip the ends upward and outward like bird wings. It’s what all the bird-brained girls did.

The worst class of junior high was PE because we were required to take showers, and the teacher stood near the open showers to make sure we all went through. Each day I faced the task of deciding how I would humiliate myself.  I was allowed only one small towel, so I could either cover my body as I ran through or cover my hair to protect my hair. I was younger than most of the other girls because I started school earlier, so while their bodies looked more and more like women’s, my looked like it had started to develop and then changed its mind. Sometimes I opted for that first mortification, covering my hair; other times I opted for the second. In those cases, I could cover my body, but all or part of my hair got wet. I never knew if I would emerge with all of the long part straightened or look in the mirror to find one side still flipping up while the other side hung down like a broken wing. Almost always, the little nest on top turned into a soggy, frizzy mop.

Why did those mismatched socks I saw the other day uncover these memories?  One popular style at my school was a pleated skirt, a pullover sweater, knee socks, and tennis shoes. If you wore a white skirt with a black sweater, it was considered high fashion to wear one white sock with a black tennis shoe and one black sock with a white tennis shoe. The velvet bow in your bird’s nest could be either black or white. I could never decide which was better; both went well with the red face of humiliation I usually wore.