I often hear people talk about those strange late hours of the night like 10 p.m. and 11 p.m., but normally I wouldn’t recognize them if they hit me over the head with a sackful of starlight. In Paris, however, I grew acquainted with them and even supped with them. So it wasn’t really my fault that I slept in every morning. Even the grandchild did, that creature of early morning, who we walked into exhaustion every single day.

We chose the Denon Hall of the Louvre and walked along the Daru Hall admiring the sculptures. Then up ahead without a head stood Winged Victory. From there we winged our way in search of Mona Lisa.

My biggest surprise and greatest delight at the Louvre was my grandchild’s interest in the paintings. While my daughter pushed through the crowds to see Mona Lisa, the grandchild stood in fascination before Mantegna’s St. Sebastian and asked me to explain why he had so many arrows in him, and did it hurt. Although we took a good look at the world’s most famous smile, the child didn’t ask many questions about her. However, we spent a lot of time looking at and talking about The Wedding Feast at Cana by Veronese. After that, it was, “Look, Grandma. What’s that? Oh, what is he doing? Why is she sad? Oh, look, look at that one. Tell me about that one.” Art-gawking with a five-year-old has to be one of life’s richest treasures.

Tuileries Garden between the Louvre and Place de la Concorde

Later we rested at the fountains outside the Louvre to watch the flocks of visitors and PIGEONS! In the cool of the evening we walked through the Tuileries Garden, and then step by winding step up to the top of the Arc de Triomphe to see the city and watch the Eiffel Tower light show at dusk.

Our late night dinner back at the apartment included champagne, part of our welcome package. At bedtime, we said our last “Good night” in Paris.

Sunday we ate a late breakfast and went over to the Bastille area to the open market. As if I hadn’t had enough tomato, mozzarella, and basil already, I ordered some for lunch. We did some shopping, ate our last Berthillon ice cream down by the Seine and went back to the apartment to pack up for our train ride to London.

Berthillon ice cream, I will carry memories of you forever (Five seconds on the lips, forever on the hips)

Then we remembered that we had forgotten to have an emergency on our last day. We checked our train tickets, our luggage, and the apartment. Nothing was amiss and we seemed doomed to an adrenaline-free goodbye. My ever resourceful brother sensed my disappointment, and thirty minutes before our ride to the train station was due, decided to check the luggage requirements for Eurostar. Voila! The beautiful cutlery he had bought that afternoon was not allowed on board: no pokey knives with slicey, dicey edges. We called the shop where he bought them (thankfully just a block and a half away) and asked it they could ship the knives. Yes, but they were closing in ten minutes. My daughter grabbed the cutlery and ran to the shop. We locked up the apartment, dragged the suitcases down the winding stairs, and voila again. The grandchild slipped and slid partway down the spiral steps, while I had two heart attacks, lost my mind three times, and cried.  Other than some bruises, the child was fine. My daughter returned and we congratulated one another on averting not one but two possible disasters while we awaited our ride.

Thirty minutes after the appointed time, no driver appeared. My brother called the company. “Was it today, monsieur? I thought you said tomorrow.” At this point, how shall we say, le pulling of le hair began and someone began speaking French, as in “Excuse my French.” Here at last was the true emergency; the other two were what the French call amuse–bouches, the bite-sized tidbits that keep your mouth amused while you wait for the entree.

On the narrow streets of Ile Saint Louis on a warm Sunday afternoon in May, traffic moves slowly and the few taxis one sees are too small for three adults, one child, and six pieces of luggage. Eurostar trains do not wait. Le panic set in. 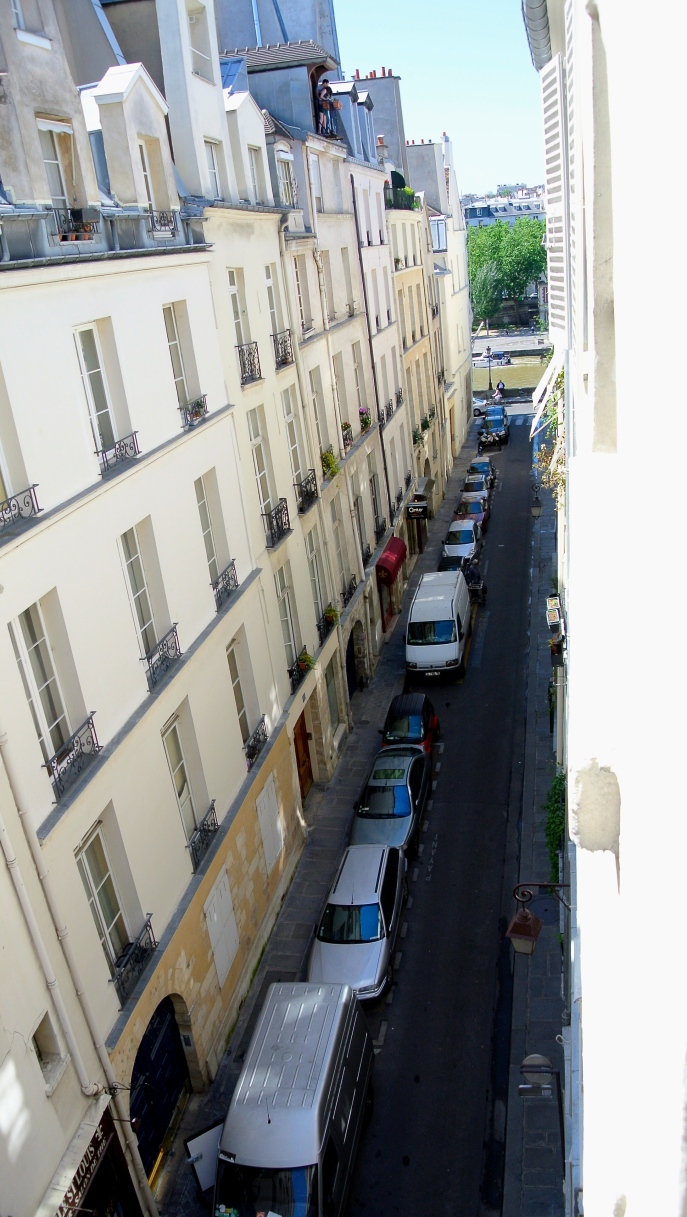 The street outside of our window (Rue Le Regrattier)

The corner where our taxi appeared

And then…tout de suite, we heard the sweet toot of an empty taxi van. We waved; he waved back. We did not ask him how or why he was nosing his way down the one-way Rue Saint-Louis en l’Île, but we gave him a nice tip. He got us to Gare du Nord station with little time to spare. We hurried to the immigration line, dragging our luggage behind us, where we managed to get into the slowest line possible. We barely made the train. 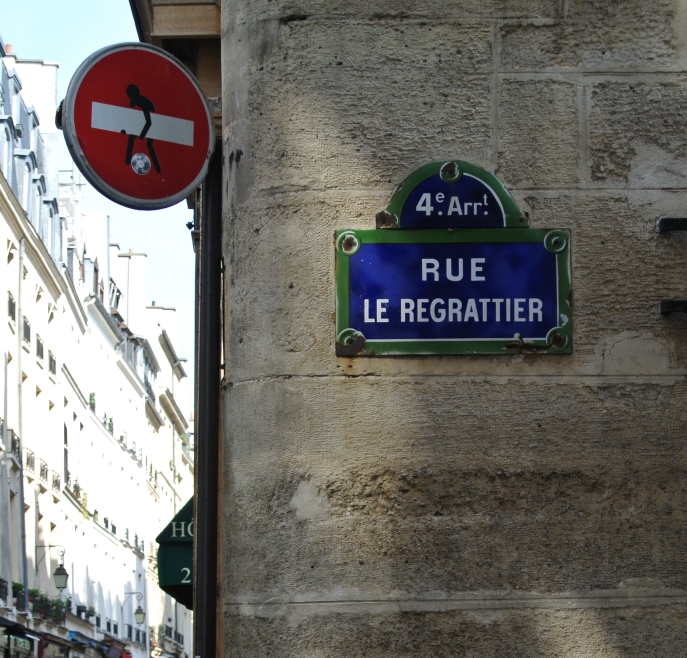 About two hours later, after a nice meal on the train and several games of iPad Yahtzee, we arrived at Saint Pancras station in London, where we were picked up and taken to our flat. By midnight, we were also flat. We are so prone to doing that in the presence of beds.

Next installment: The child discovers that London Bridge is not falling down