In which we potter, then hurry

Most people don’t know this, but gravity is much stronger in Paris than in Wisconsin, so we found it hard to get out of bed in the mornings. When we did, we pottered around, drinking coffee, applying lots of butter to help the croissants and bread slide down our throats, and doing more brazen staring out of our windows into the apartments across the way and down at the passersby in the streets.

On the first morning at half past a bag of croissants, we noticed it was almost time for lunch, so we cleaned up the breakfast dishes and prepared more food. Time had that elastic quality, seemingly stretching out before us forever when suddenly it snapped back and we realized that unless we immediately grabbed our things and carefully rushed down the 60 stairs, twirling ourselves silly, we would miss our appointment at the Eiffel Tower.

We get an eyeful of Paris

I don’t think this is the right way. 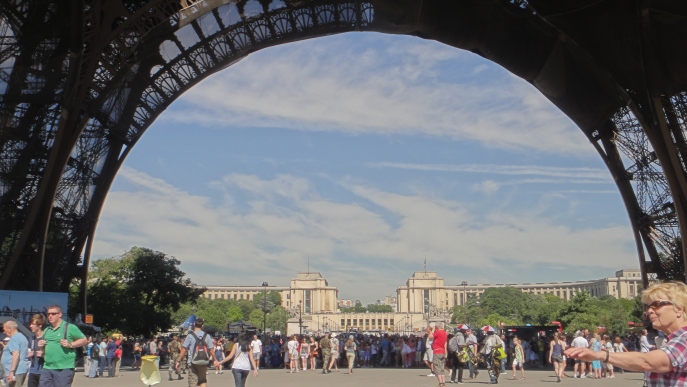 Under the Eiffel Tower

Our reservations to ascend to the top of the Eiffel Tower were for 1:30 p.m. and we managed to allow ourselves enough time to ascend from the nearest subway station at approximately 1:30 p.m. We needed another 10 minutes to get to the tower. One person in our party wore one of those Parisian pouts, sure that we would miss our opportunity, but we hurried forward, arriving just in time to stand under the hot sun for a good 30 minutes. That is the value of having reservations.

Between the apartment and the Eiffel Tower, the grandchild’s feet decided to grow and the shoes that had been fine up until that point, suddenly began to produce blisters and loud complaints. Band-aids helped for a while, but every time the child spoke they fell off.  Just kidding; we minions carried the child aloft in our arms.

As our elevator angled its way up to the top deck, both my daughter and grandchild grew quiet. Anything high is low on my daughter’s list of fun things to do, but she forced herself to walk to the edge, lean on the railing, and take pictures. My grandchild grasped my neck and refused to look. I slowly moved toward the railing and began commenting on how tiny the cars and motorcycles looked. When I said that the people looked like the ants in my grandchild’s ant farm, interest replaced fear, and soon we were laughing and enjoying ourselves. When we spotted a soccer field, the shoeless one stared for a while and then said, “Guess what? I see Alex and Grant. They play soccer.” I casually mentioned that they lived in Wisconsin, not Paris. With infinite patience, my grandchild explained that sometimes they played in Wisconsin, and sometimes they played in Paris. Who knew?

After our eyeful of Paris, we carried the child to the nearest shoe store, a very posh little store with posh little shoes for posh little feet for people who have the posh to pay. To protect the shoes, I bought $15 socks (the cheapest they had), and the child found a pair of sandals, which my brother purchased. Once the incredibly expanding feet were accommodated, we all felt 35 pounds lighter. Literally.

We were five kilometers from the Pompidou Museum, but we decided to walk, stopping at a café along the way for some refreshment. We arrived at the museum late in the day and wandered around. The grandchild liked the video installations, and the two of us spent 20 minutes watching a black and white film narrated in Spanish and English that consisted of wooden trains carrying the names of political movements and ideologies on top of them. We sat on the floor in a small room, the child enraptured by the monochrome trains that sometimes climbed the wall, sometimes dumped all of the letters, or rode across the ceiling, all narrated in a monotone voice. I have no remembrance of what was said, but the only way I could get my grandchild to leave the room was to say how important it was to let mom and uncle know about this fascinating film. Thankfully, five-year-olds have short short-term memories; after sharing the exciting news with mom and uncle, we discovered other inexplicable art and then the outside fountain frequented by pigeons, or as my grandchild says, PIGEONS! 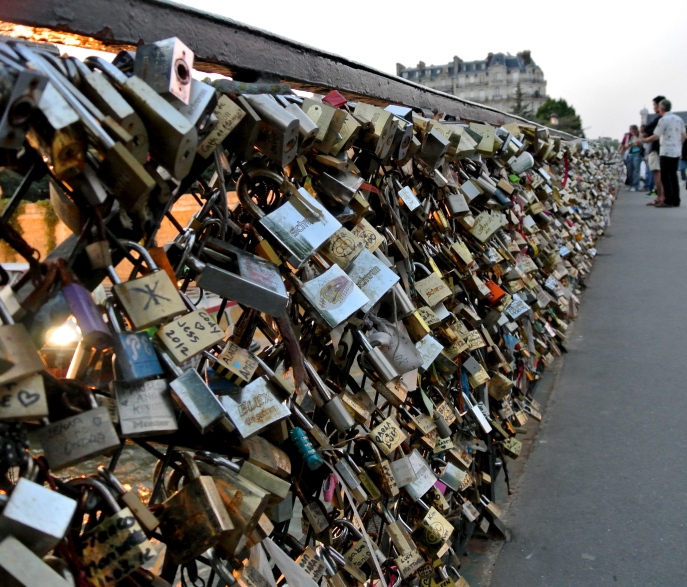 Love locks on the Pont de l’Archevêché: one of the key places in Paris to practice picking locks.

A view of the Seine River. If you fall in, they say you will go in Seine.

Around 9:00 p.m., we strolled back to Ile Saint Louis, stopping at Norte Dame to watch the street performers and admire the sky. We lingered on Pont Marie, our closest bridge, to wave at the boats sailing by, so we didn’t return to the apartment until 10:30. I don’t remember exactly what we ate, but I know it included bread, cheese, tomatoes, fruit and wine because every time we shopped that’s what we bought.

The Bedchamber of Secrets

After showering, I heard noises in my bedroom. My pillow sat propped up on the headboard and said it had some secrets to tell me. It could only whisper, so I had to put my ear up to it to hear: it was something about Montmarte and a photography class the next morning. I didn’t feel the full gravity of it all until the following morning.

NOTE TO READERS:  Yes, I broke the law of parallelism in the title. Yes, I did it for cheap thrills. You can try to get even with me, but I doubt our paths will ever cross.

33 thoughts on “Paris: Hurry, potter, and the bedchamber of secrets”