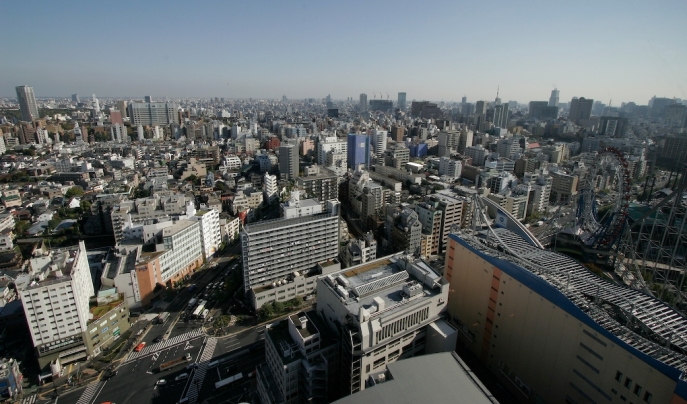 When you grow up in a city or town, you see the streets, houses, businesses, and other landmarks so often, that after a while, you hardly notice them. The commonplace bores you.

Languages are like cities. Throughout the day, your ears travel through streets lined with familiar phrases, idioms built of ancient brick, and housing tract after housing tract of clichés. Your ears can get as bored as your eyes.

When you travel to another city or language, whether for a visit or to live there, nothing bores you. That maple tree looks no different from the trees at home, but here in this new setting, standing there in front of the yellow house, sheltering the red bench, it enchants you. As the late afternoon light shimmers on the leaves, you take picture after picture, hoping to capture its beauty.

And once your ears adjust to living in a new language, you find simple words and phrases, shortcuts that help you bypass paragraphs of thought and lead you straight to what you want to say. You find yourself wandering down a street in Japanese, feeling the wind blow softly, soyo soyo (そよそよ ) and you almost skip because now you know how to name the sound of a soft wind. Then when the wind dies and the noises cease, you hear the sound of silence, shiin (しいん) and begin to hear that silent sound everywhere. All of the new words delight you, and you are surprised to learn that some of the famous landmarks in this new city are considered clichés by the people who grew up in the language.

I have spent some time living in and traveling to other languages, and I teach English to students from other countries, so I know the delights of hearing words for the first time and falling in love with them. 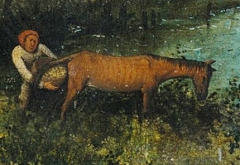 Yesterday while I was walking around the web looking at proverbs, I popped over to Wikipedia to look at their pages and found one about Pieter Bruegel the Elder’s painting Netherlandish Proverbs, also called The Blue Cloak or The Topsy-Turvy World. In 1559, Bruegal painted a village scene depicting over one hundred proverbs. Wikipedia kindly took snapshots of each scene with its corresponding proverb and meaning. One of the men is carrying daylight out in baskets, an apt image for wasting time, while another man stands behind a horse and discovers that, contrary to appearances, horse droppings are not figs. Finally, a man runs away after getting involved in a dangerous venture having learned his lesson: if your beginning includes eating fire, you will have sparks in your end.

I like to imagine that Bruegel painted the proverbs when they were still in high school, fresh-faced, funny, full of witty remarks, and sly insights. Go see for yourself and enjoy.

Once you have learned the proverbs illustrated in the painting, watch this short animated version by artist, Martin Missfeldt.

19 thoughts on “When proverbs were young”