First, let’s clear up any misunderstandings you have about the difference between weather and climate.

This gives you a clue as to where weather comes from. Courtesy of http://gwendolyn12-stock.deviantart.com/art/Sky-Texture-390272597 (NOTE: only the picture comes courtesy of her, not the weather)

Weather is one snapshot from your trip to Prairie du Sac for the Bovine Bingo and Cow Chip Throw Festival, climate is the 2-hour video of the event that you sent to your relatives for Christmas this year.

Weather is one drop of water in that little drip from your kitchen sink, climate is the water bill you get at the end of the month.

Weather is one website that you visit, climate is the history of every website you visit that the NSA keeps, just in case.

Weather is one pixel, climate is a collection of those pixels that shows Elvis leaving a Walmart in Pittsburgh.

Weather accumulates until it becomes climate. And since it’s left outside day after day, it rusts, which leads to change. Not the paltry amount you find under your couch cushions, but the kind that causes your skin to lose its elasticity. Skin that once covered your thighs now pools around your ankles like an old pair of underpants, but unfortunately you cannot discretely step out of that loose skin and look back in shock wondering who would leave a pair of underpants on the sidewalk, which is a true story about one of my daughters that I try not to tell because it’s…em…barrassing.

And what does that have to do with windbreaking news? Be patient, I’m getting there.

Climate changes just like you do, and only a tiny handful of the bad changes are your fault, while the majority are other people’s fault. And NBC has finally revealed that a major part of the bad climate changes falls at the feet of the U.S. and China, like an old pair of….dinner rolls.

Trust me, I was as surprised as you are at that last statement, but according to the screenshot I took, NBC, typing in the voice of  Jonathan Overpeck, director of the University of Arizona’s Institute of the Environment, clearly states that most of the problems in climate change are due to the “outsized rolls” of China and the U.S. As temperatures rise, these rolls also rise. 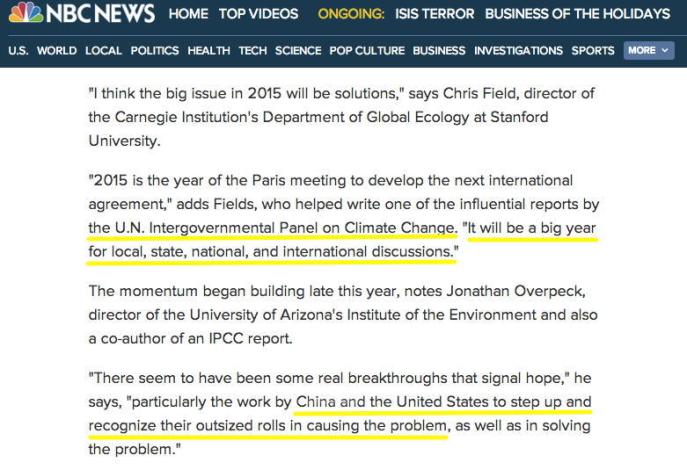 There are two important takeaways here. First, the initialism for Overpeck’s institute is UAIE. By adding the initial of his last name, we end up with UAIEO. Yes, friends, all the vowels. Clearly, our Dr. Overpeck is involved in vowel play, and while he may fool others, I’m no popover.

Second, Dr. Overpeck’s name not only includes the word peck, he prefers to be called Peck. As you know, a peck was traditionally used as a measurement for flour. Rolls need flour, and outsized rolls need more flour, or eerily, over flour. To make matters even more conspiratorial, he went to Brown University for his MSc and Phd. And what do China and the U.S. do with their oversized rolls once they are made? They brown them.

Guess which one belongs to the U.S.

What does all this mean? Sadly, your guess is not as good as mine, but don’t be discouraged, keep on guessing. And I’ll keep on doing my part by bringing you windbreaking news like this.